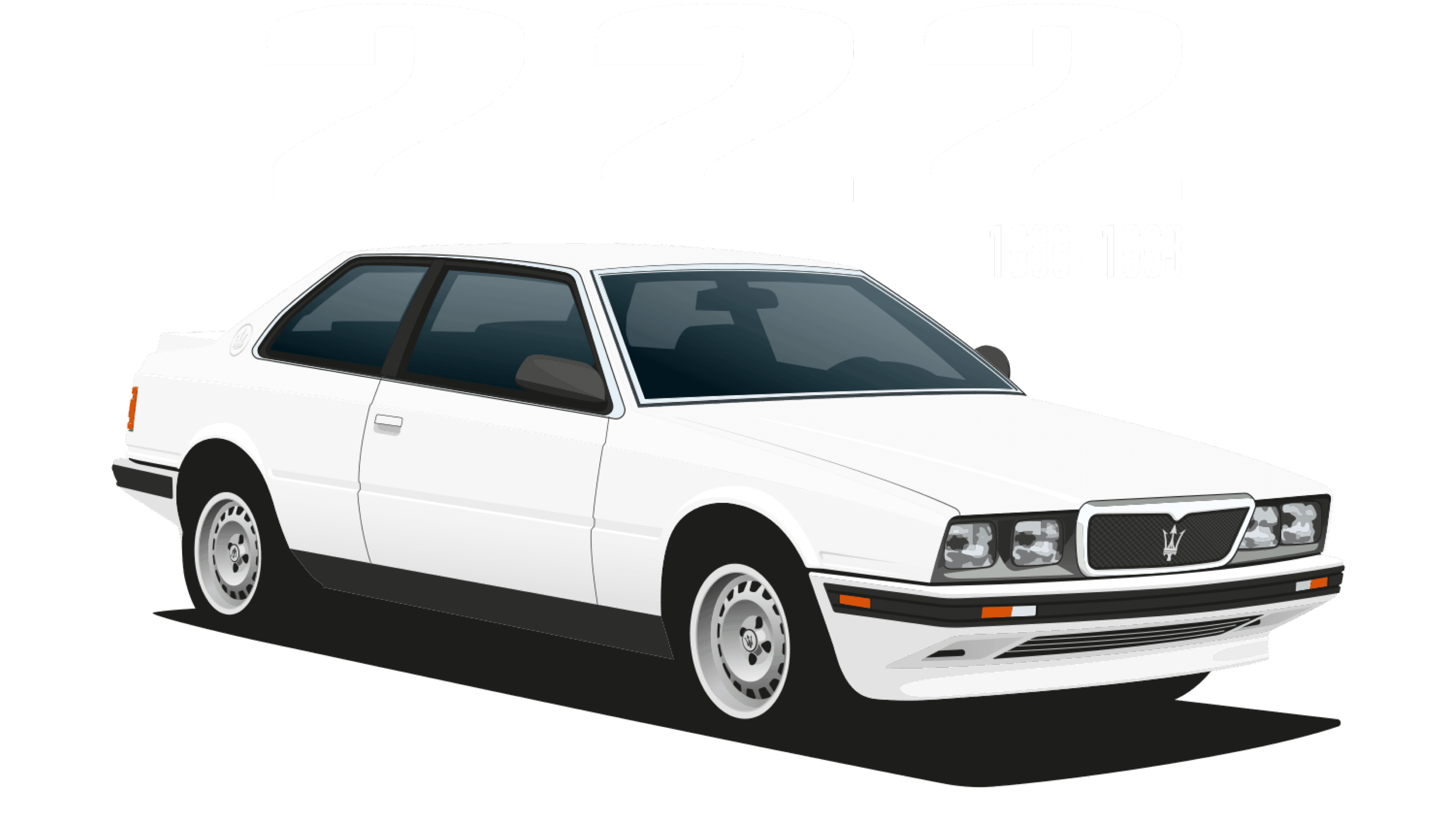 The first Biturbo not to use the word 'Biturbo' in its name.

The presentation at the 1988 Turin Motor Show of the 222 marked the first major change to the original Andreani coupe design. It was a replacement for the Biturbo Si from which it copied the mechanical V6 Biturbo 2.0 litre engine with 220 hp. The word 'Biturbo' was dropped from the name, which adopted 222 in line with the numerical names following the 425, the 228 and the 430. Logically it should have been called 220 for 2 doors, 2.0 litres. The third number 2 remains a mystery; it could refer to the 2nd series or the 2 overhead camshafts. Some sources even refer to …. 222km/h! 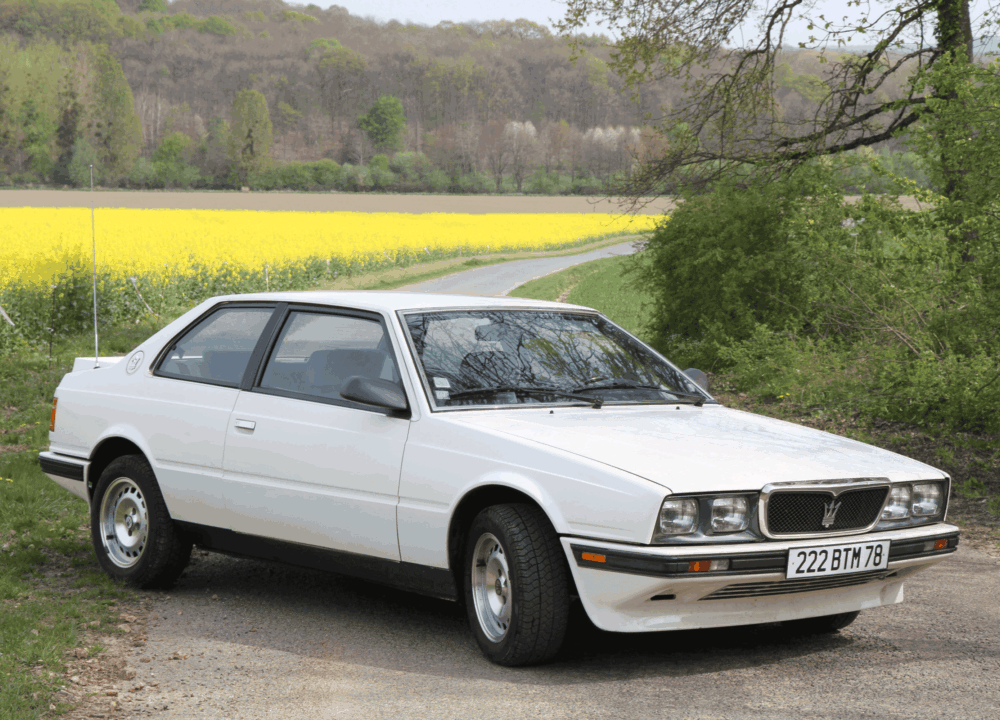 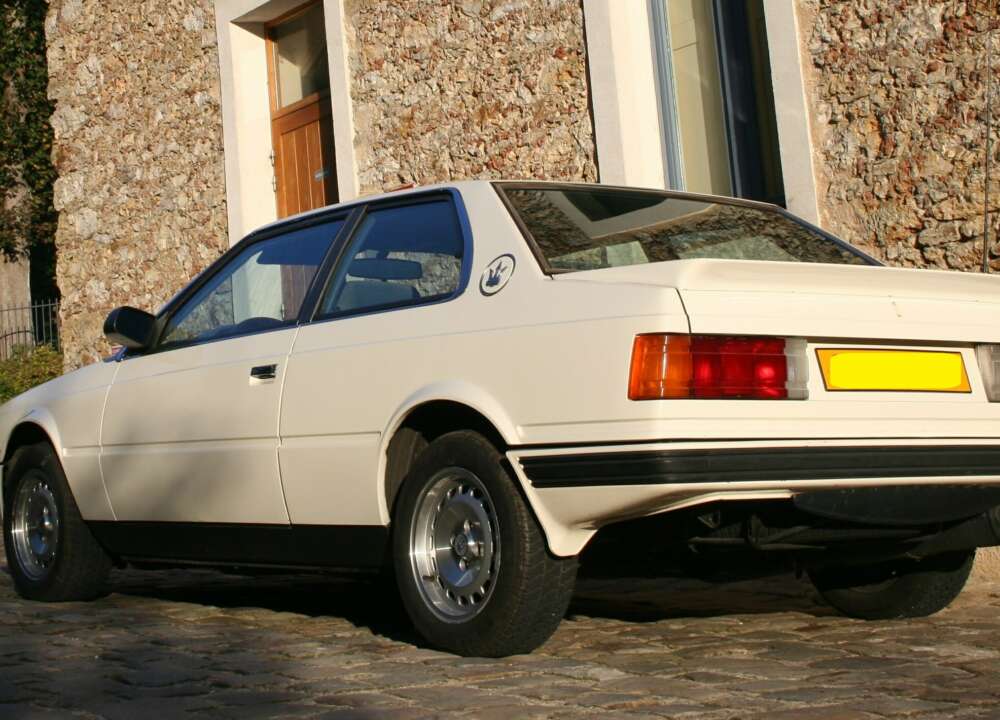 During the same year, an export version was announced, which was badged 222E. This car used a fuel-injected 2.8 litre Biturbo engine with 3 valves per cylinder which was first used in the 228/430 and featured many improvements to the running gear over the 222.

The suspension was modified and lowered to improve handling; a new steering system was introduced with cantilevered steering arms, the 'Meccanica Attiva' system. New brakes, including ventilated discs at the front, were also used. Finally, new wider and larger 15-inch wheels, secured with five bolts instead of the original four, were used. While the manual gearbox was the same as the previous model, if automatic was specified, it was now a four-speed unit by ZF rather than the old three-speed Borg Warner. All subsequent models featured a version of this mechanical specification.

In 1990 the 222SE was released. This was a 222E with more enveloping bumpers, streamlining the exhaust at the rear. In 1991, the 222SR ~ Super Racing was introduced; this was basically a 222SE with some added "Shamalisation". The unique front spoiler at the bottom of the windscreen, faired headlights (cat's eyes), forward-protruded grille. The ultimate Andreani design for the Biturbo is the 222 4v (4 valves per cylinder). It was introduced 10 years after the initial Biturbo release in 1991 with the 2.8-litre engine with 4 overhead camshafts and 4 valves per cylinder. 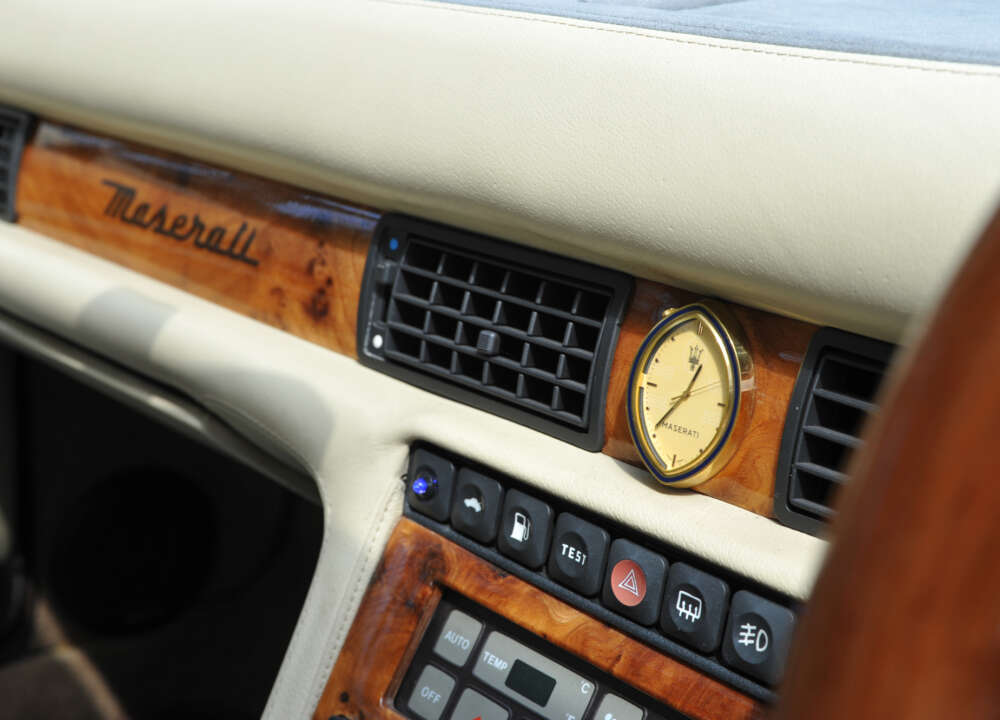 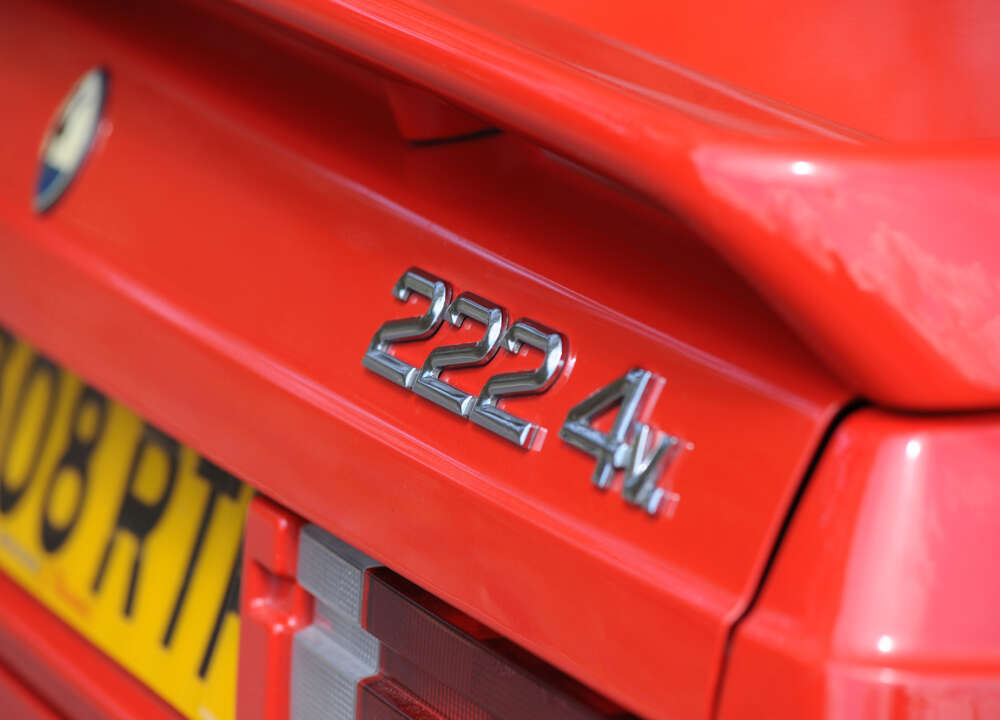 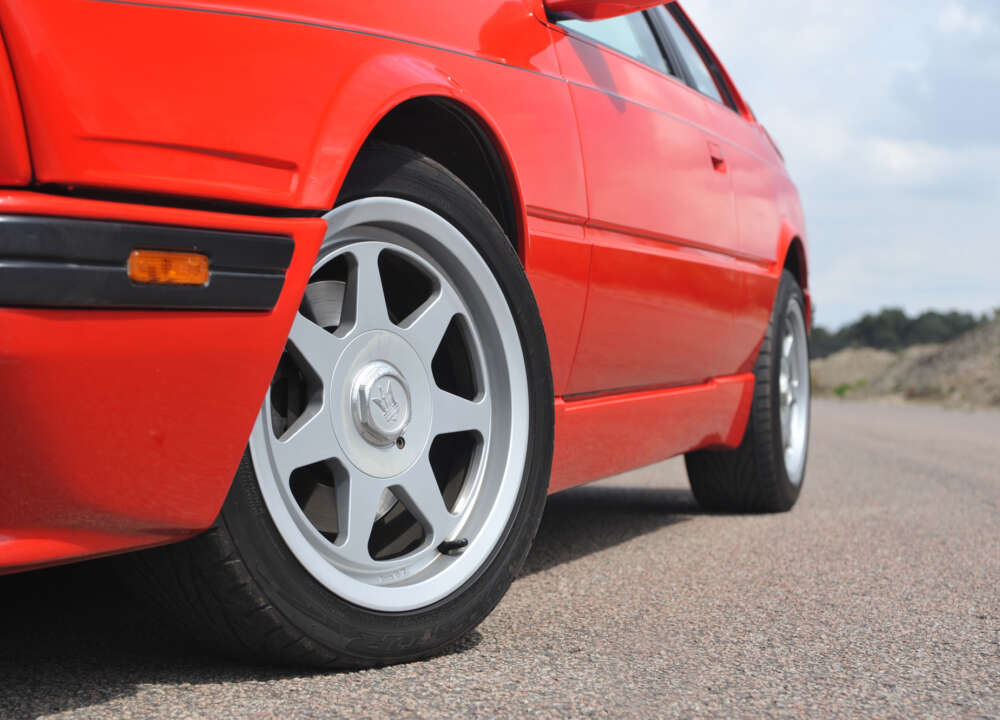 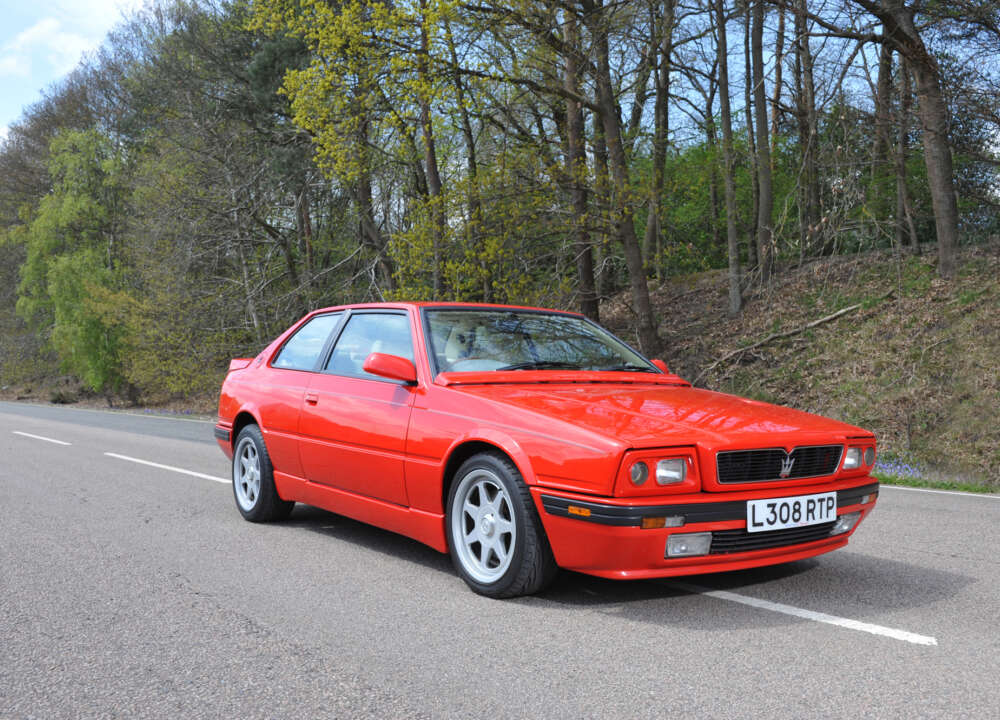 Marcello Gandini, the father of the Maserati Khamsin, Shamal, Ghibli II and Quattroporte IV, brought very subtle aesthetic evolutions to the Andreani design to obtain the 222. He introduced the rounded and downward sloping grille with slightly oblique mesh, tapered bonnet leading edges and streamlined mirrors. But he had the wisdom not to touch the purity of the initial Biturbo. The rear spoiler was loaned from the Biturbo Si and the height of the car slightly reduced from 1.30 to 1.25 m by lowering the suspension. The NACA air intakes disappeared from the bonnet. But heat extractors, basically inverted NACA ducts, appeared on the 2.8-litre version.

Credits go to Alido Fongione, Philippe Murari and Andy Heywood for their contributions to this page. Photography of the red 222 4V by Michael Ward.
Images of the white 222 were taken by the car owner, Sergio Lombardi. This car belonged to the dealership in Paris when the Chardonnet network sold Maseratis in France. The car initially had the logo 222 at the rear right, as evidenced by its test in Auto Hebdo in January 1989. The previous owner had it removed and Mr Lombardi bought it in 1998 as it is today!

Feel free to send info or anecdotes on all Biturbos to info@classichemasters.com.