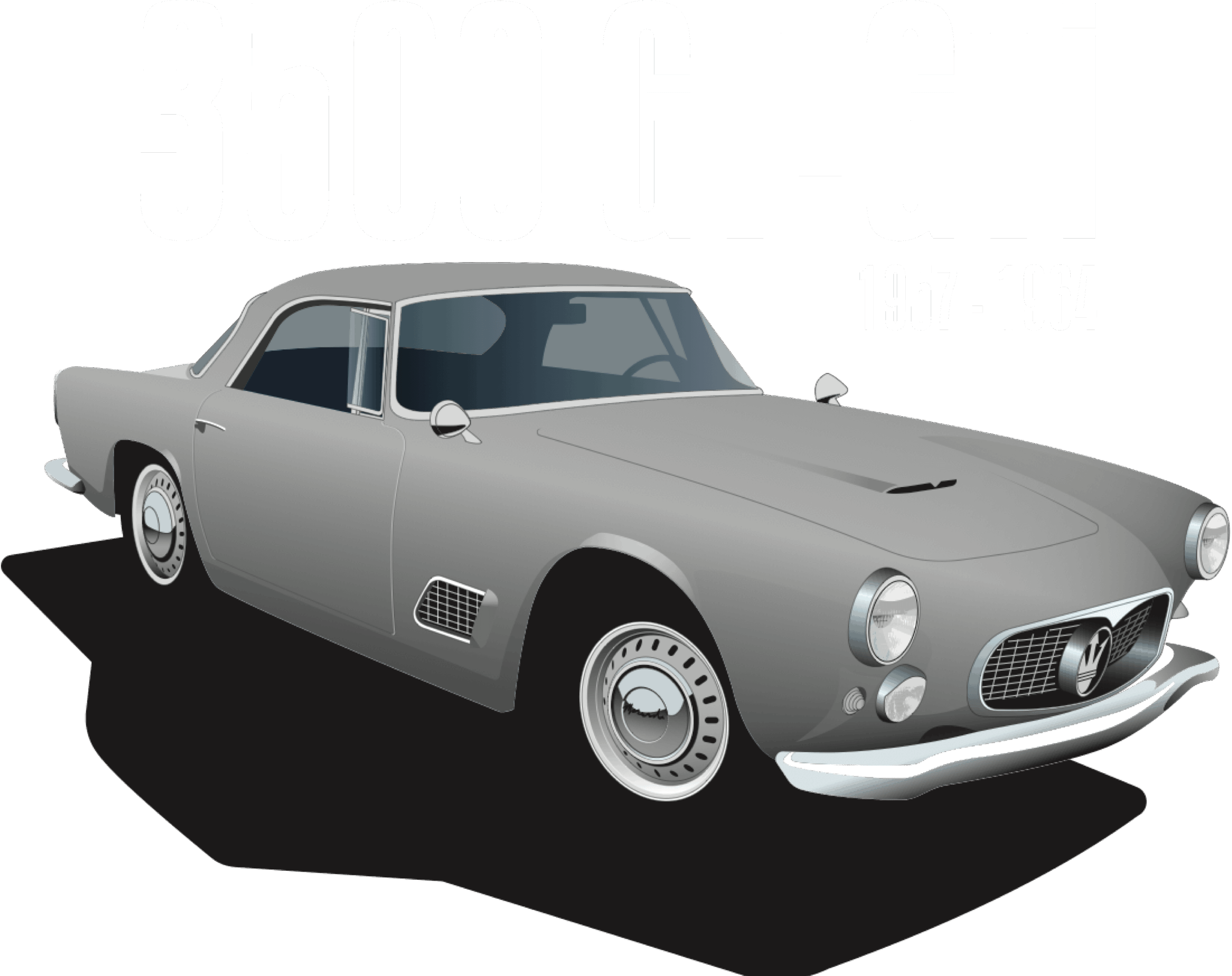 The very first Maserati Grand Touring car, an instant success that set the mould for all of its successors.

The firm’s road cars up to that point, e.g. the various A6 versions, had been made in tiny numbers, so the 3500GT was indeed a new dawn for Maserati. It was a change of era with the end of the factory’s official involvement in racing and the beginning of actual series production as decided by Adolfo and Omar Orsi. The new car had to sell. It was vital for the factory as it had suffered some financial problems. One of these was due to a large order of machine tools from the Juan Peron government in Argentina in 1954 not being honoured after the dictator’s ouster in 1955. The approach for the 3500GT as it would be baptised, its design, its technical conception had to be suited for larger-scale production. There was also the need to create the right image, what Maserati stood for. There was thus a lot of pressure on chief engineer Giulio Alfieri, but he would come through, masterfully. Had he not done so Maserati would have collapsed and become a long lost, faded name in automotive history but winners thrive under pressure.

The route chosen was not that of a spartan extreme sports car but one that set the tone for well over sixty years of Viale Ciro Menotti road cars from Modena. It was a fast but comfortable motorcar for a distinguished driver who wanted to travel at speed but in comfort. He could do this with two small seats in the rear and in good discreet taste with a large trunk for those business or romantic trips. The Maserati Gran Turismo concept was born.

Those decades after WWII saw a sustained economic boom. Optimism was in the air, traffic was low, speed limits almost not existent, and the desire and need for such cars became a real demand. There was a perfect convergence between what was wanted by the market and what Maserati was about to create. All the stars were aligned.

Other Carrozzerie had been consulted or submitted designs spontaneously, but it was Touring which was chosen. Its Superleggera alloy body was light, showed excellent craftsmanship, and provided silence as the aluminium is noise absorbent. Visually it was very elegant and suggested speed without being aggressive. The Trident was displayed in the nose grille inside an oval frame as in some previous road cars.

In pure Maserati tradition, the chassis was a robust tubular affair, strengthened by steel panels and simplified for production purposes. British sourced front double-wishbone suspension arms were fitted from Alford & Alder. The rear axle, leaf-sprung, was a Salisbury unit. The steering was also British, by Burman. Girling dampers were used along with drum brakes all round.

Note from Adolfo Orsi Junior:
"Choosing outside suppliers from other countries had several advantages. The factory had a guaranteed fixed cost, the quality was under control and the “just-in-time” delivery allowed an easier and faster production. Selecting ZF in Germany and Girling, Borg & Beck, Alfort & Adler, Burman, Salisbury in the UK were the best options. Aside from Weber, Pirelli, Borrani and Magneti Marelli in Italy they were missing manufacturers specialised in these components. The lack of suppliers was mainly because of tax reasons. Fiat, Alfa Romeo, Lancia were manufacturing these articles in-house."

The chosen engine configuration was an all-alloy block with steel cylinder sleeves. An inline six-cylinder 3485cc unit (hence the name 3500GT) loosely based on the 350S racing engine but in wet sumped, low revving mode. Instead of gears, chains drove the twin overhead camshafts. At the same time, not six but twelve sparkplugs fired it all up via twin coil Marelli ignition. Initially, Weber 42DCOE carburettors were used. This produced a satisfying 220hp. The gearbox was sourced from ZF in Germany, a four-speed at first.

In creating it, Alfieri had devised the Modus Operandi for Maserati for the next fifteen years: the 3500GT was very well-born and was more than the sum of its parts. The man from Parma had gone to the market to get his wares in Britain and Germany and dished it out: he must have been a brilliant cook at home!

The first Touring prototype was called the Dama Bianca (the white lady), and it had its world premiere at the 1957 Geneva show. An Allemano designed 3500GT was presented at the same show but was later rejected by the factory. It was very well received, and orders were blissfully plentiful. The production model had a narrower and taller grille than the Dama Bianca. A handful of the first cars left the Modena works at the end of the year before production really revved up in 1958. The fact that Maserati driver Juan Manuel Fangio was reigning 1957 world champion did not hurt either publicity-wise.

Driving impressions were equally positive. It was easy to use, performed well, cushioned its driver in comfort while being pleasant, exciting. The engine sounds wonderful, oozing its racing origins. It became the Gentleman’s ideal bespoke suit on wheels and a staple of jet-set life, a frequent sight in fashionable spots. The Orsis and Alfieri could sit back, relax and be proud.

A total of almost 2000 3500GT’s were sold between 1957 and 1964 including the main 1981 * production models with Touring body and a few others bodied by Frua, Bertone, Allemano, Boneschi some more attractive than others in the waning days of one-offs.

The 1960 Paris car show saw the introduction of Lucas fuel injection which would initiate a never-ending debate among Maseratisti. Some preferring carburettors for their sound and simplicity while others favoured the smoothness and slight increase in power (to 235hp) of the mechanical British FI. From that point on the previously optional 5-speed gearbox became standard.

An important evolution was that of brakes. Initially, they were drums all round, then discs were introduced at the front and eventually at the rear as well. There was thus a significant evolution and if you were to drive a 1957 car with Webers and drum brakes and then a 1964 version with Lucas and four discs you would feel it: it is called progress. Nevertheless, some cognoscenti staunchly prefer the earlier versions.

Many captains of Industry adopted the 3500GT as their transport on both sides of the Atlantic. Astronaut Walter Schirra had one while Peter Revson Grand Prix driver and heir to the Revlon cosmetics fortune used his daily. In Europe, 5-time world champion and legend Juan Manuel Fangio had one on loan from the factory which he used extensively. It surfaced at auction in Padova in 2019 as a rough project needing everything. The estimate was so outrageously optimistic that it did not sell, a well-restored car could have been bought instead. Connoisseur Jay Leno has one Maserati in his vast collection, and yes it is a 3500GT. There is a registry which lists pictures and information on survivors for more than half of all produced 3500’s at www.am101.org.

Body
Two-door, 2+2, in aluminium
Design by Touring of Milan

* These numbers are not exact, as it is hard to find out what is correct. As an explanation, the last known Touring is 101-2858 (info from Fabio Collina). Only a few cars with uneven chassis numbers were built. All other cars came with even chassis numbers. Also there we NO cars built with chassis numbers between 101-456 and 101-500 (info from Fabio Collina) and furthermore other bodied cars are between the numbering. According to AM101 registry keeper Marc Florie, It is impossible that more than 1429 Touring cars were built! 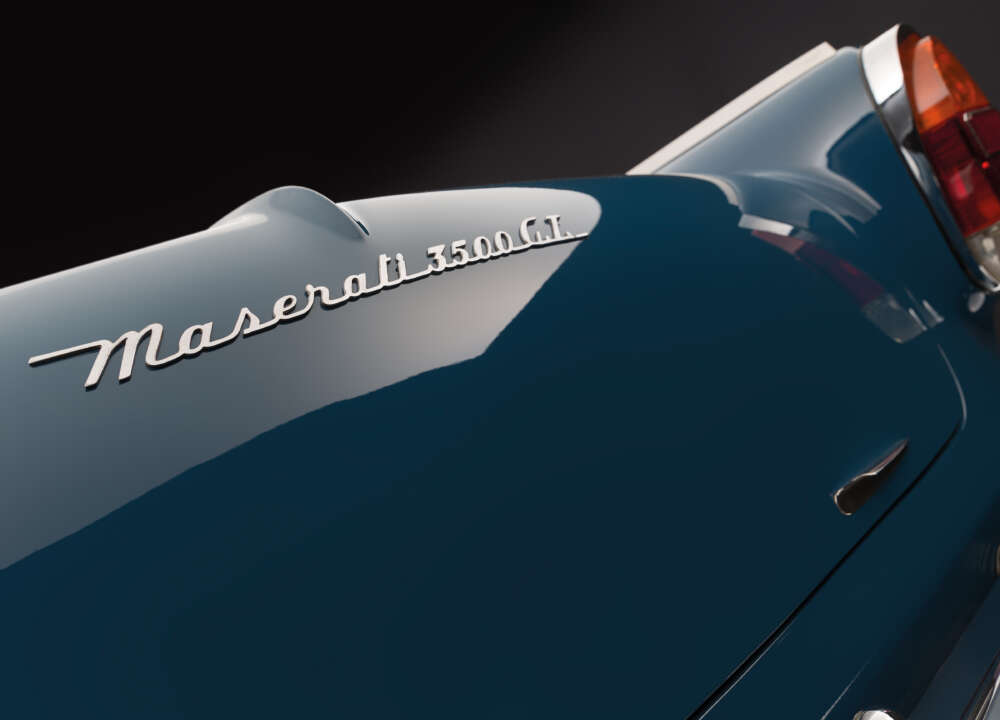 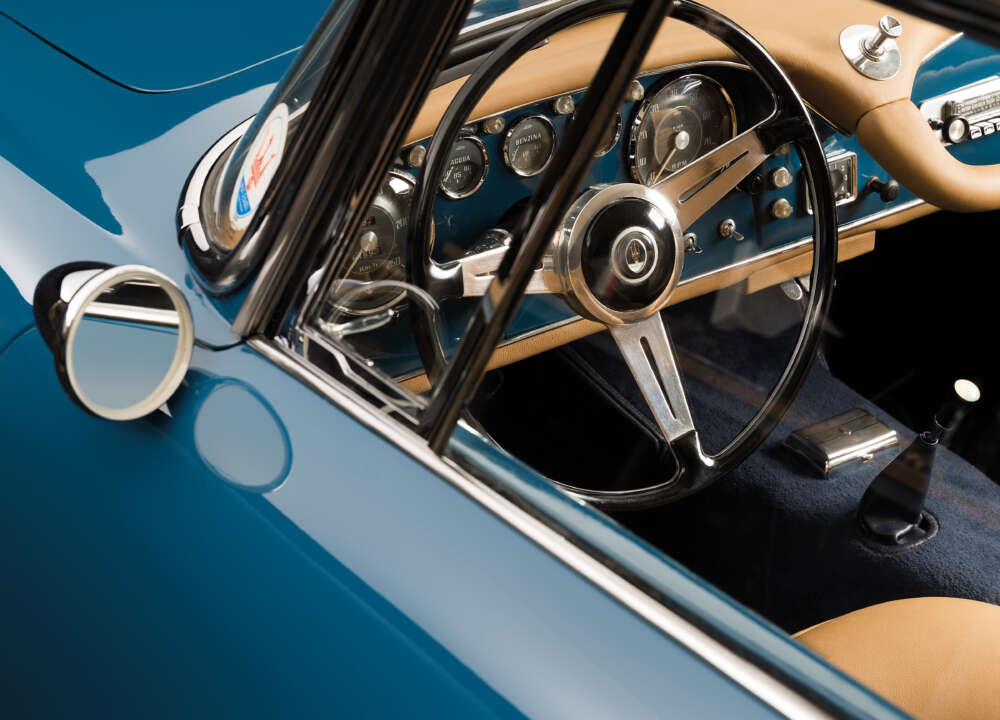 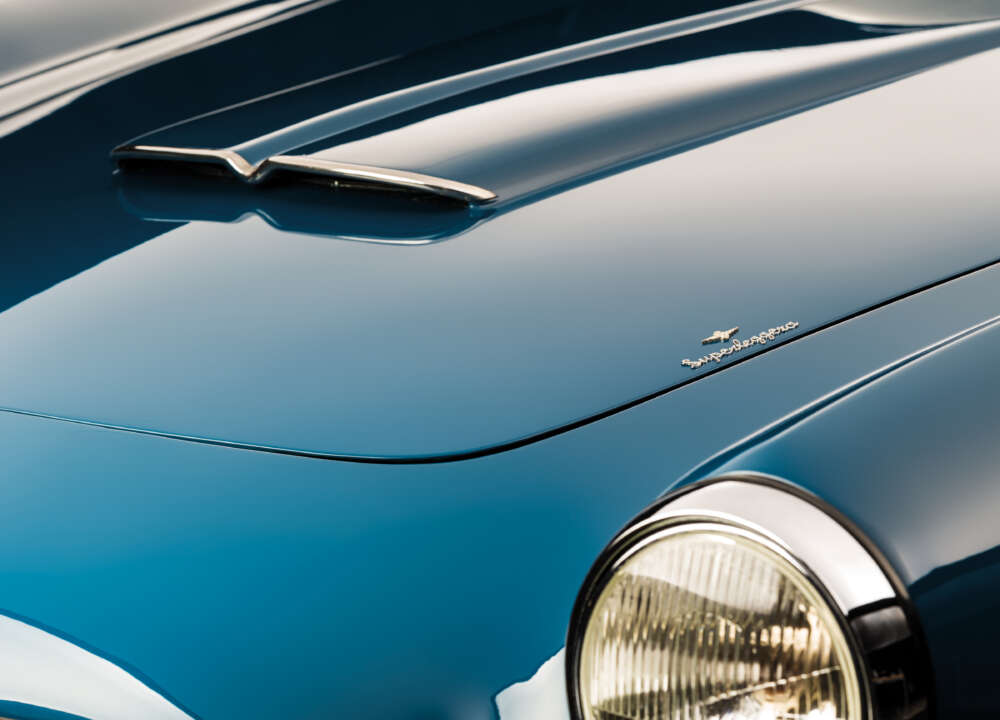 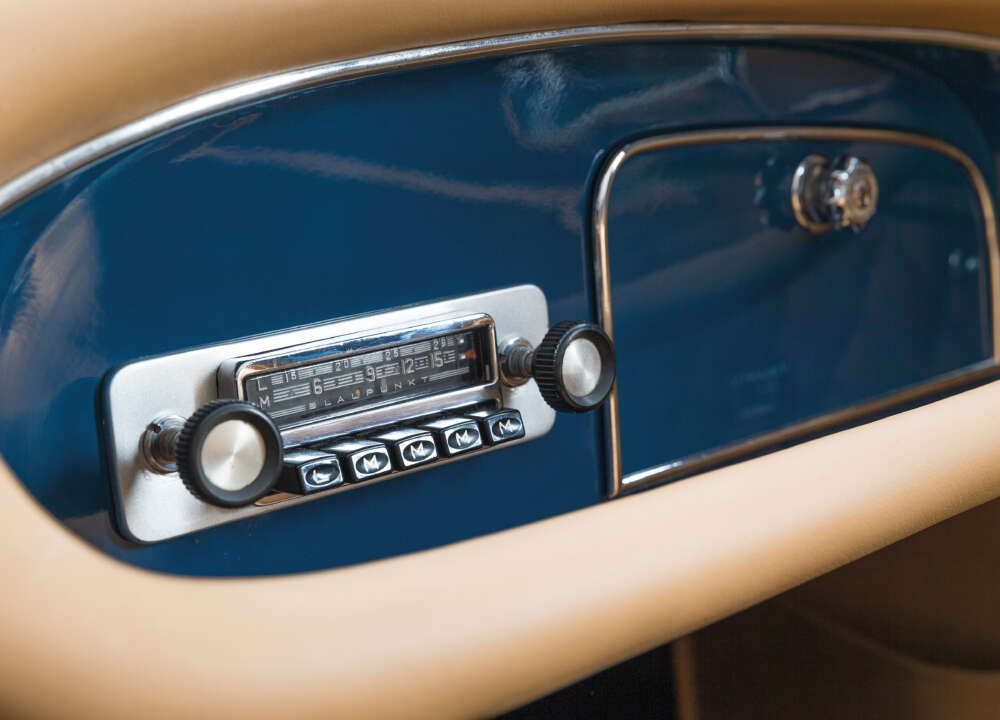 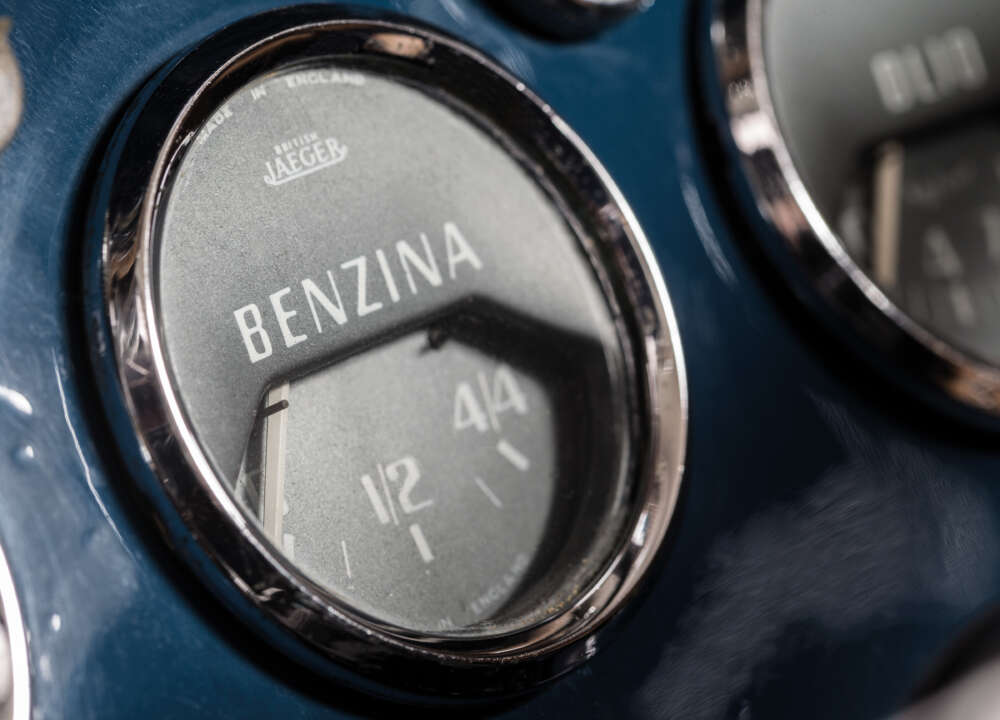 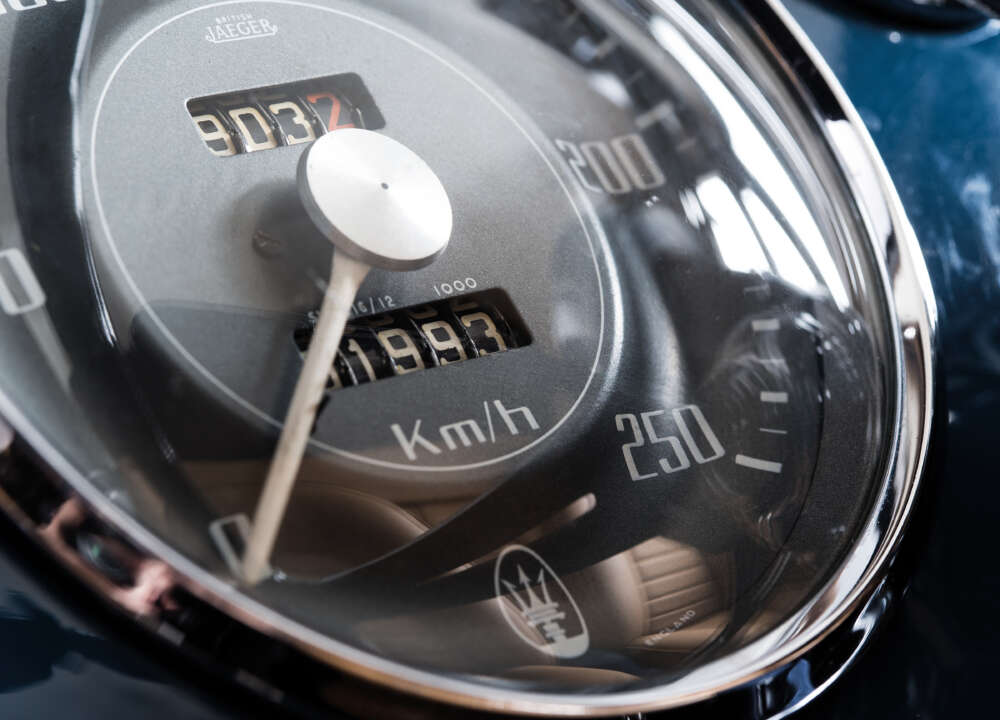 As always with Maseratis, they are valued higher in Europe than the US. Hence many models initially sold in the new world have been repatriated to Europe. There is a surprisingly large number of 3500GT enthusiasts who quietly devote themselves to this model. A definite sign of its popularity is the number of cars in restorations in the last twenty years but even more so over the previous five. The fact that many parts such as cylinder heads, for example, are being remanufactured proves they are a strong, persistent market. At auctions, in the last few years, prices have hovered between 150.000 and 220.000 Euro depending on the condition of the car, venue and buyer motivation with one reaching 242.000 Euro at Bonhams Goodwood festival 2017 and a 1961 Maserati 3500 GT achieving similar pricing in Gstaad, Switzerland at the end of that year.
As ever verify if the car is matching numbers, look for the usual signs of rust and neglect, cylinder head porosity is possible so look for water loss when running. The problem only manifests itself when hot so it can be hard to diagnose but can be quickly sorted: several efficient methods have been developed. Better an original car that has been consistently pampered, is well sorted and used than a shiny speculator’s repainted yet very uncertain offering.

We are aware that the valuation of this car is very subjective and depends on many criteria. That is why auctions are used as a barometer to sense where the market is moving. However, premium restored or preserved classic Maseratis change ownership through private sales ( and seldom in an auction). As a result, rarely do we discover the price for an off-market transaction.

As far as driving pleasure there is no comparison. The 3500GT handles much better than Aston’s heavy feeling offering. Aston DB4’s nowadays sell for double the price of 3500GT’s. The Trident is roomier more comfortable than the E Type, which is very cramped inside. It may be pretty, but it's very low shape comes at the expense of ergonomics and space. In fact, after the first production cars, Jaguar was forced by customer complaints to hollow out the floor to create more legroom. The 3500GT is also easier to drive than the Prancing horse and thus less tiresome and more comfortable over long journeys. This is most typical and very much defines the difference of ethos between the two, even if the 250PF coupe was comparatively restrained for a Maranello car. Few could deny that Ferrari made the 250GTE in reaction to the 3500GT’s success. While imitation is the greatest form of flattery, they only made 954: the market had spoken and elected its winner. Nowadays GTE’s sell, like the Aston, for as much as double the equivalent condition 3500GT market price, so the choice is obvious or very costly.

This registry is in the hands of Mr Marc Florie in The Netherlands. It is dedicated to the Maserati 3500 GT Touring, the first production car of Maserati.
Marc is trying to register as much as possible known facts about the cars, whether they still exist today or have been scrapped or only info on the engine is still known.
Much of the information is coming from Maserati 3500 enthusiasts so If you happen to have information about these cars please write Marc an email!