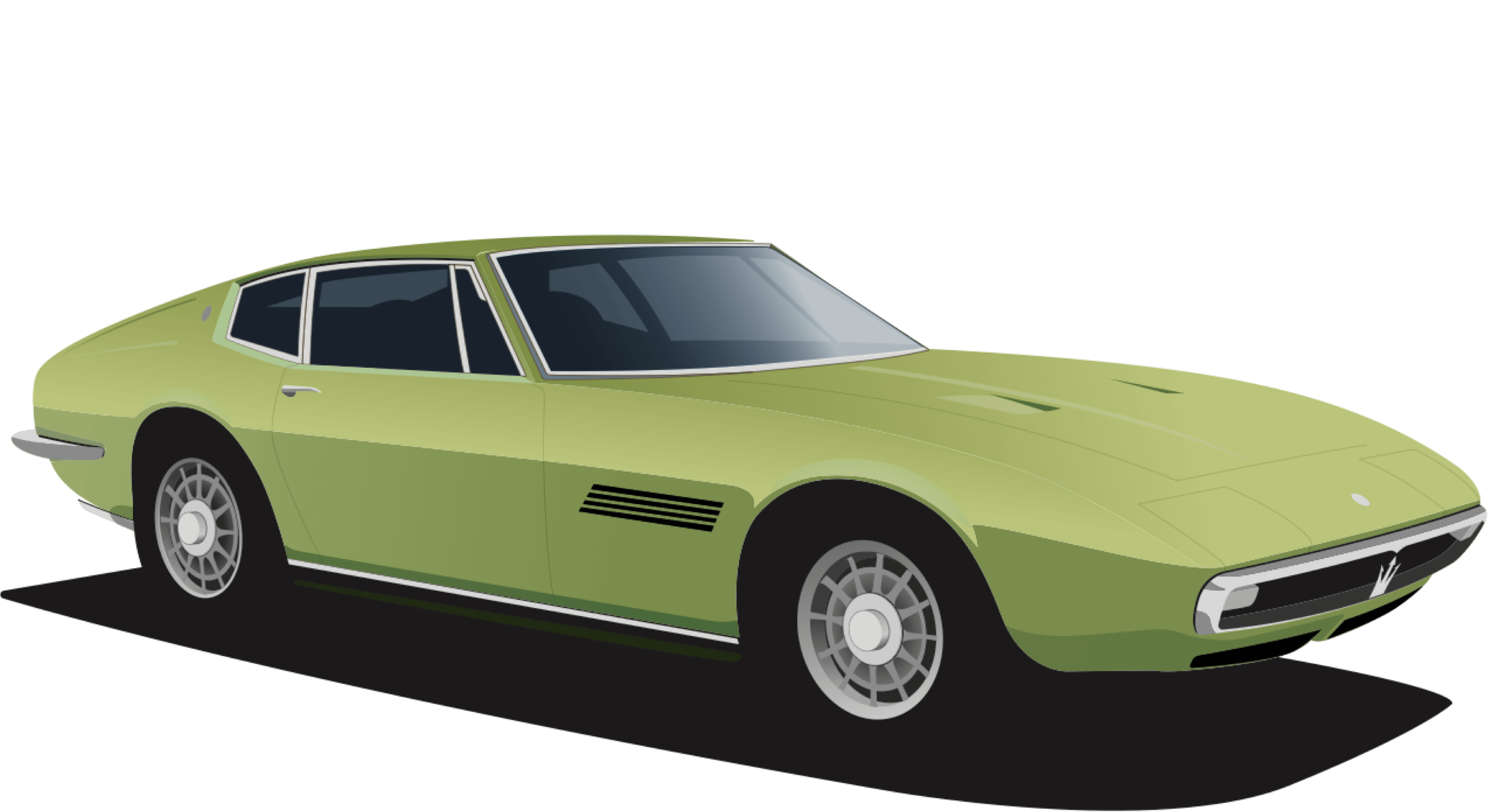 The Ghibli was for Maserati an important departure from previous designs as well as a bold step into the future. The introduction of the Autostrada network in Italy and Europe opened a new world. This brought a bright new future for Grand Touring cars, one of speed without limitations and travel over vast distances. In the case of Maserati that would always include a certain comfort but the Orsis and chief engineer, Giulio Alfieri felt the time had come to make a bold statement to position the Trident right up front in the new market.

This would be the Trident’s first V8 Berlinetta and be codenamed Tipo 115. The design would be radically futuristic, striking and was entrusted to Ghia and its young talented Giorgetto Giugiaro. What he came up with was a masterpiece, a sleek, glamorous jet for the road. The Ghibli was named after a wind that blows in Libya from the mountains towards the Mediterranean. The car was wide, low and clearly chiselled for speed yet avoided any tackiness, any vulgarity, it exuded both speed and class. Likewise, in the cockpit, its occupants were made to feel very grand. No car massages the ego of its occupants more than a Ghibli. The long low body shape with a full leather interior, reclined seating, air conditioning and electric windows were perfectly matched to the aristocratic race-bred V8 –now a dry sumped version of the 4.7-litres- sounding as smooth to the ears as a great wine to the palate.

With proper large discs all round, gone were the days of drum brakes. After the first 100 cars, vented discs were fitted. This new vented disc was a major change in that it meant a disc with a separate bell, which in turn meant different hubs. It was an early type of floating disc and very advanced for the day. And actually not only did the discs change but also the callipers. With the early solid discs, there were two callipers per disc at the front – unique in Maseratis! When they changed to vented discs, they went back to the Girling callipers that had been used since 3500 (though with spacers so they could fit around the thicker vented discs).

The rear suspension though was very traditional with a Salisbury axle and leaf springs, but it worked well and was predictable. Not only was the Ghibli cosseting but it was easy to drive, and that must have factored in very strongly in its success. A manual ZF 5-speed was standard, but an automatic 3-speed version by Borg-Warner was also offered. The pop up headlights could flash at the traffic ahead when closed through the grille to claim its rightful path on the fast lane.

The Ghibli was particularly successful in the USA where the gravitas of its substantial presence was appreciated. In fact, none other than Henry Ford II bought one, had it parked in his design centre and told his design staff to learn from it. On the road, it was the perfect long-distance GT supremely stable, able to waft you all day above 200km/h from one end of Europe to the other with unfailing serenity. On twisty roads and circuits, it was very competent, but when challenged hard showed its size and bulk and would understeer. That though is a situation most drivers will never encounter: you waltz with this grand lady you don’t draw her into hard rock dancing.

Initial production was only meant to be 100 cars.
Still, that idea was forgotten as orders snowballed like an avalanche with 1170 built from 1966 to 1973. The Ghibli SS was introduced in 1969 with increased capacity up to 4930cc. A handful of 4,9-litre cars had in fact been produced before the new specification became official. In any case, the power difference wasn’t very significant –maybe 5hp- and true Ghibli connoisseurs will be happy with either version. No Ghibli was ever raced seriously, it was clearly a Grand Touring car for high-speed cruising. There were only minor differences through production. Early cars had toggle switches while later ones had rocker switches, deemed safer by US regulators. The prototype had concealed outer door handles, but that was not retained for production. Wheels were initially real knock offs either Borrani or Campagnolo while later cars received bolt-on wheels, with the lug nuts hidden by the fake central knock-off, again either Borrani or Campagnolo Starburst. Later cars had overriders on the bumpers, not attractive but efficient in protecting it from clumsy parking manoeuvres. US cars had additional large indicator lights on the front and rear wings/fenders.

The Ghibli was very popular in movies and was used in many of them. The most notable appearance was in a scene in La Piscine (the swimming pool) where Alain Delon and Maurice Ronet leave Romy Schneider and Jane Birkin by the pool to go for a spirited drive. In the politically charged In nome del Popolo Italiano (In the name of the Italian people) a crooked business tycoon played by Vittorio Gassmann symbolically drives a Ghibli while being relentlessly investigated by a prosecutor played by Ugo Tognazzi. Sensitive souls should not watch the 1971 movie Christa in which a white Ghibli is sacrificed, the car being destroyed in a dramatic ending. Driving a Ghibli is always a grand experience. Suddenly you are an Italian Count rushing from Milan to Portofino for your dinner date with a Princess, and the car will look just right in front of the restaurant, your driver’s soul already well fed. 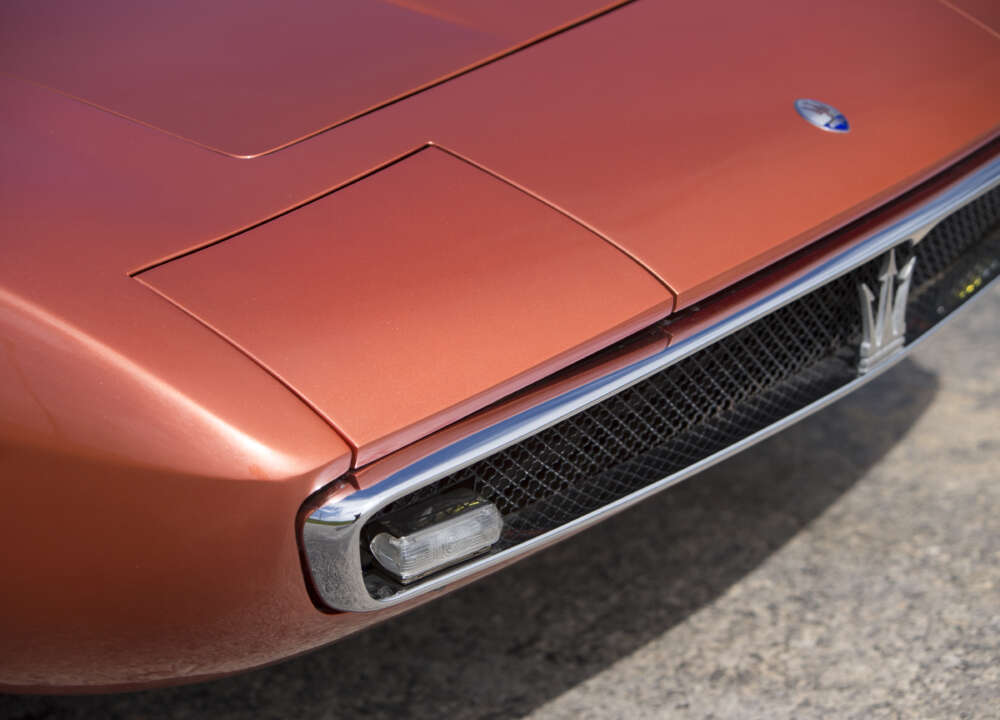 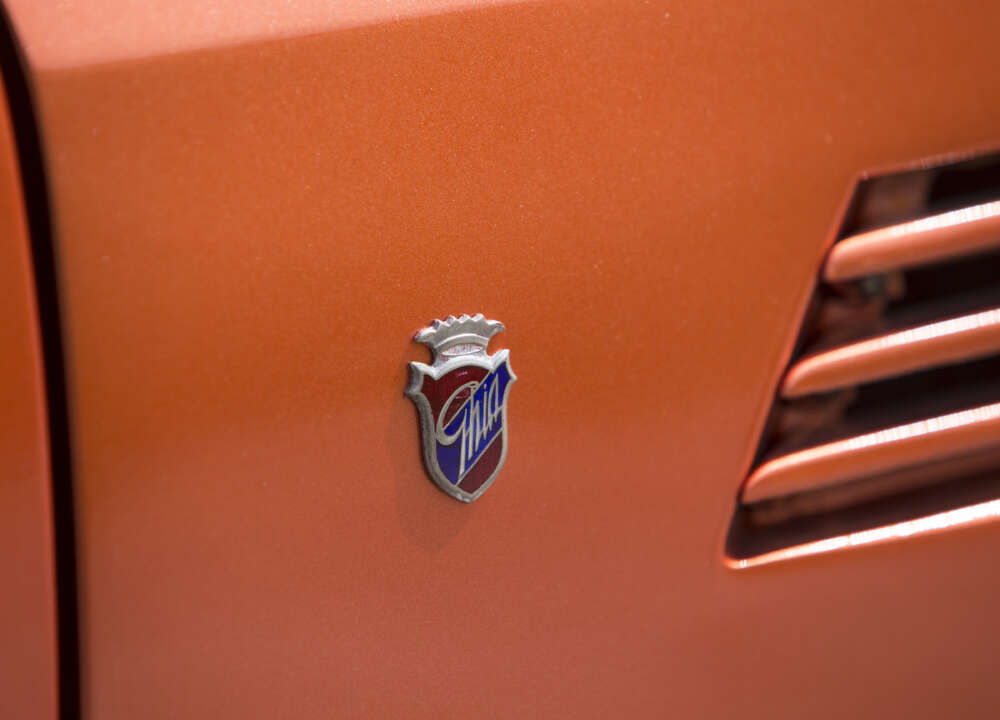 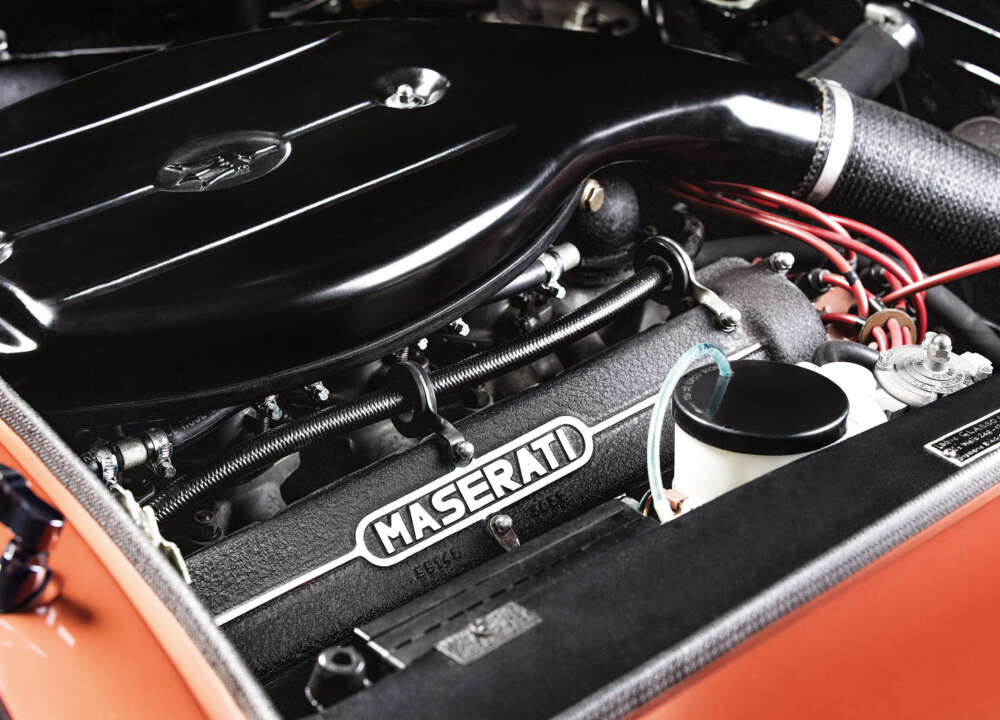 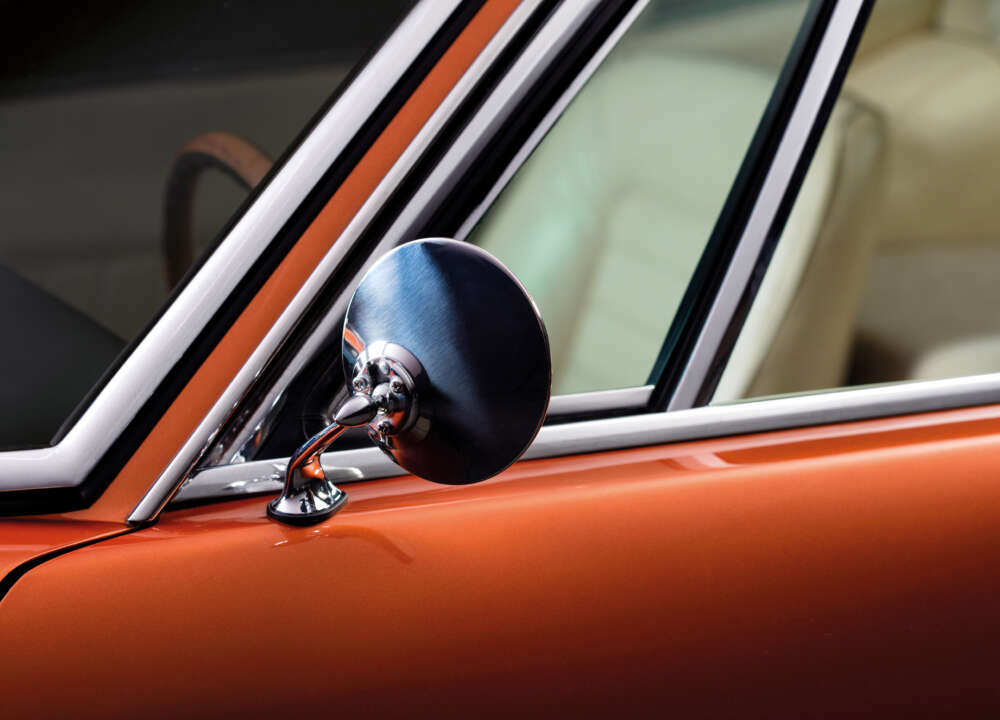 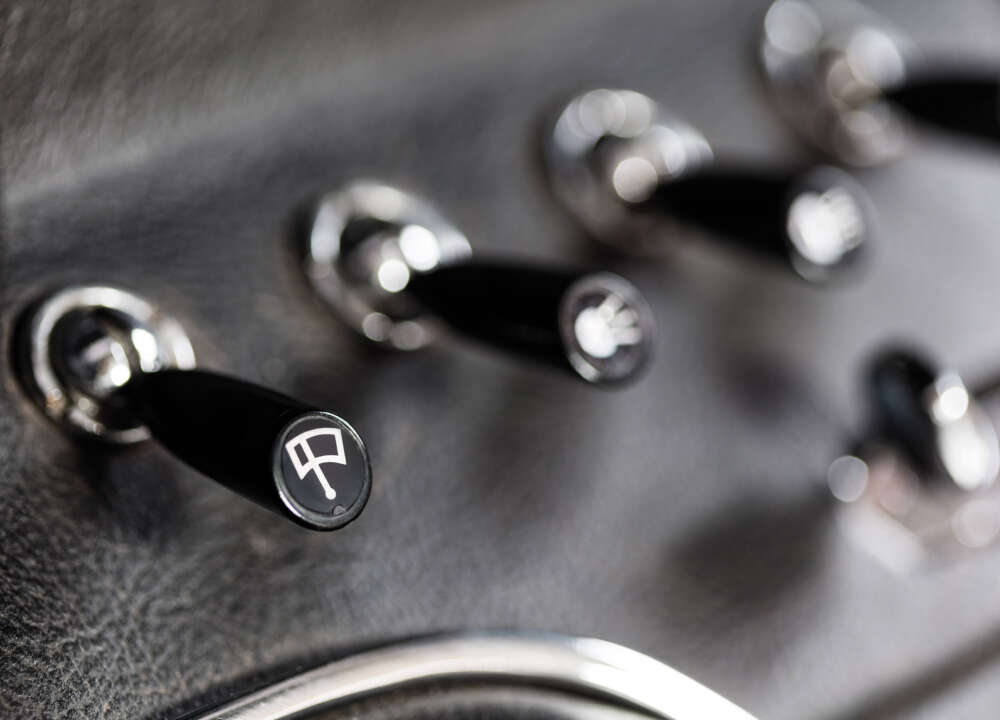 The motivation to create the Ghibli was to assert the company and the model against its multi-faceted competition. There was the Ferrari 365GBT/4 “Daytona”, and its Grand Touring oriented sibling the 365GTC/4, there was the Aston Martin DBS V8. Then a new type of competitor, the hybrids such as the Iso Grifo made in Italy near Milan but with American engines, mostly Chevrolet Corvette and later from 1972 with Ford Boss 351 engines. The Lamborghini Miura, however, was not a rival being far too extreme and uncomfortable over long journeys, not a grand tourer at all.

There are enough Ghibli Berlinettas out there to choose the right car. You want to avoid unloved cars that have received a quick paint job to hide their troubled past. If you have a restoration in mind, you need a good base car that is complete, unmolested. Body rust is not an issue in that case, but missing parts can be. If you consider an already restored car make sure it was done right. Have a pre-purchase inspection done by someone intimately familiar with these cars, such as a Classiche Master. The price will depend not only on condition but on the venue as they are valued higher in Europe than the US. An excellent restored car in a significant European auction might sell for double what a passable example might get in a small US auction. The price range varies from Euro 100.000 to 250.000 but the 2013-2016 market bubble days of SS selling for over 300.000 have come and gone.
However, In January 2020 in the RM Sotheby's auction in Arizona, USA we saw a 1972 Maserati Ghibli SS sell for $302,000. This was a US-spec car in the original colours, a numbers-matching example. It was restored in Italy in 2013, with only having 3 owners from new.

We are aware that the valuation of this car is very subjective and depends on many criteria. That is why auctions are used as a barometer to sense where the market is moving. However, premium restored or preserved classic Maseratis change ownership through private sales ( and seldom in an auction). As a result, rarely do we discover the price for an off-market transaction.

The Daytona is not really faster than a Ghibli in the real world but is more tiresome to drive over long distances with heavy steering and pedal effort. Plus you can buy three Ghiblis for the price of a Daytona nowadays! The Aston Martin has its qualities, plush like a British club armchair but handles like one. The Iso Grifo is what it is and if the US engine does not deter you, finding a good one at a reasonable price is not easy. They are either in sorry shape for the price of a good Ghibli or redone and priced far higher. Amidst all these, only the 365GTC/4 is a real rival of the Ghibli in terms of competence and comfortable enjoyment. It is usually priced 30% above a Ghibli in similar condition. The Ghibli is easier to maintain and clearly shines through now as it did back then: there was a reason for its success as it is clearly the compelling choice.

The Ghibli Registry is publicly available https://www.ghibli-registry.com/registry/ . You can have information added or updated via the registry keeper Julian Quincey who lives in Australia. He is also reachable on Facebook.