The 3500 Spyder version which appeared at the 1959 Paris salon was not by Touring like the Berlinetta but produced by Vignale and designed by Giovanni Michelotti. Quite surprisingly it was this version that was chosen by the factory, even though a Touring version had been shown the previous year at the Turin motor show. Whether it was just a question of styling preference by the factory or whether it wanted both the Berlinetta and the open-top version to be distinctive is unclear. By forsaking Touring as a provider, the body was by necessity no longer in alloy except for the bonnet and trunk lid. The wheelbase was shortened by ten centimetres to increase stiffness, always a consideration with open-top cars. It also made the design more distinguished from the Berlinetta.

The production version of the Vignale Spyder had been preceded by a long-forgotten and intriguing 3500 Vignale prototype Spyder which emerged decades later in California. It was restored by Ivan Ruiz in Georgia, USA. That car has significant differences compared to the standard Vignale Spyder and is really the pre-production car used to study and finalize the design. It has a dashboard welded in place, and the door hinges are also welded in, details typical of working prototypes. It had numerous detail differences: from additional air vents in the nose to unique but complicated seat designs. This would have been the sacrificial lamb for the crash test in later years, but thankfully this was not yet mandatory at the time.

The Vignale design was chosen because it was quite simply more effective, successful and handsome. It had a pleasant upsweep to the "haunches" behind the doors whereas the design proposed by Touring had a straight body line that made it look a bit like those bathtub-like American convertibles of seemingly endless length. It is also in part to avoid this that the Vignale Spyder was made with a shorter wheelbase. The rear of the Vignale version was even more visually pleasing as it leaned forward, enhancing the impression of speed. In fact, the chrome surrounds around the rear lights extended the entire height of the rear. This underlines this inclination giving it a far more dynamic poise than the bland vertical Touring back end with small lights.

The front end was really that of the Touring Berlinetta only modified in the tiniest ways, such as rounded as opposed to elongated side indicators and a V-shaped opening for the bonnet air intake.

The soft top was simple but well designed, not fussy and neatly folded down under a softcover which once attached gave it a clean, tidy appearance. The Spyders all had electric windows whereas in the Touring Berlinetta it was an option. The rear passenger space, already tiny in the Berlinetta, was slightly smaller in the Spyder due to the shorter wheelbase. The interior was very beautifully appointed. The trunk was the same size as in the Berlinetta and had the same beautiful inner lining like a bonbon box.

All Spyders appear to have had front discs, the final ones getting rear discs like the Berlinettas. Five-speed four-disc fuel injected cars are the second series.

At the wheel the Vignale Spyder is very pleasant, it feels just the right size, compact without being small, a bit more reactive than the Berlinetta thanks to the shorter wheelbase. The beautifully appointed interior and that straight-six engine sound never fail to make you smile. It was and still is an ideal car to enjoy spring and summer.

A total of 243 Spyders were built between 1957 - 1964. 204 cars were GT, 56 were GTi.
A hardtop was available, designed in a simple curvaceous way. As was typical a majority of cars were sold without it as owners had other cars for inclement weather. Two * Spyders were bodied by Touring. One prototype Spyder was bodied by Frua in a particular, almost baroque style.

Vignale Spyders were very popular indeed in films, the movie world adopting it enthusiastically. In 'Two weeks in another town' (1962) star actor Kirk Douglas plays...a washed-up actor getting another chance with a movie role in Italy in which he reunites with the good life. This was symbolized by the 3500 Vignale Spyder he drives.

In 'Love is a ball' (1963) a - South of France gold-digging - comedy about new money heiresses and fake aristocrats with Glenn Ford, Hope Lange and Charles Boyer a 3500 Spyder is used but unusually it is one of the very few Touring bodied Spyders. In 'La Bella di Lodi' (1963) a mechanic incarnated by Angel Aranda dates an heiress played by the stunning Stefania Sandrelli and a Vignale spyder again bridges the social gap. Do you see a pattern? If so, you are right. In this case, the car is shown driven at speed around the Modena Autodromo while the beauty watches calmly from the side. Intriguingly it has a B (for Belgium) sticker at the rear, perhaps a clients' car used unbeknownst to him? Another Vignale Spyder is used in 'Una vita difficile' (1961) with Alberto Sordi and Lea Massari. Many more made brief cameos.

In real life, as if enacting that fictional role of Kirk Douglas, Zorro actor Guy Williams ordered one new for his stay in Italy during the filming of a movie then asked the factory to send it to him in California. King Hassan II of Morocco owned one, and actor Dean Martin drove his around Los Angeles.

Body
Two-door, 2+2, in steel with an aluminium bonnet and boot skins
Design by Michelotti for Vignale 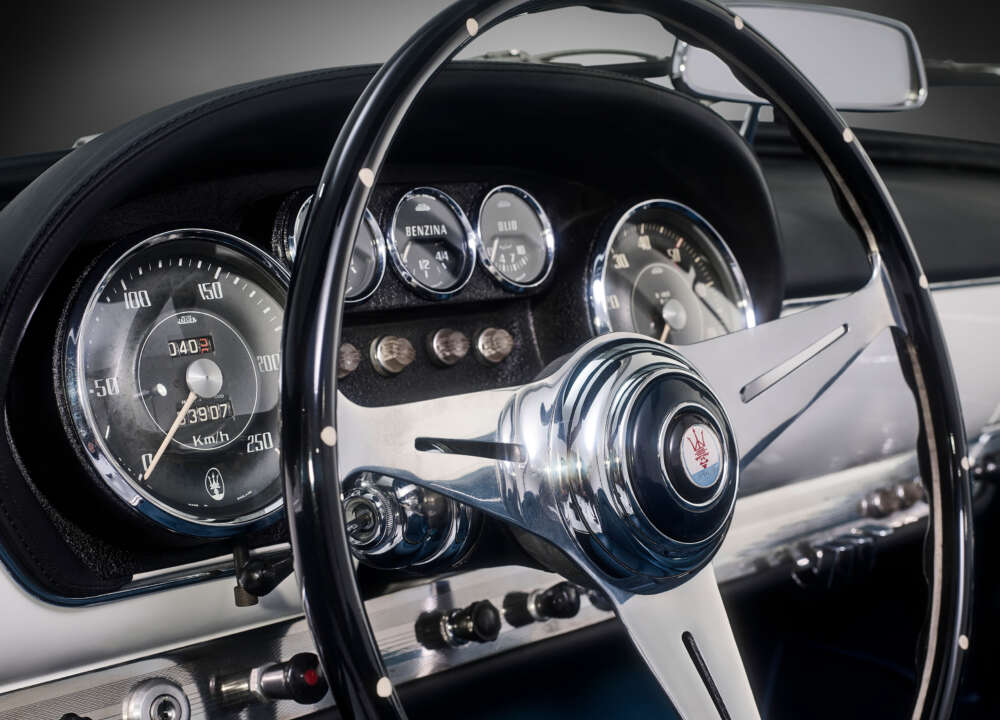 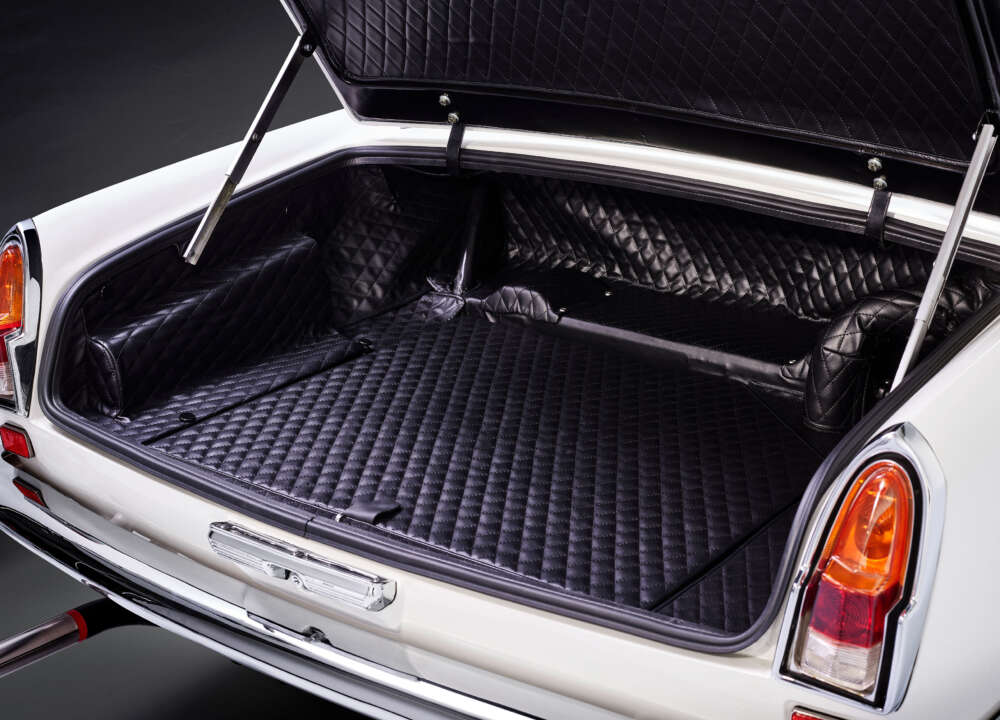 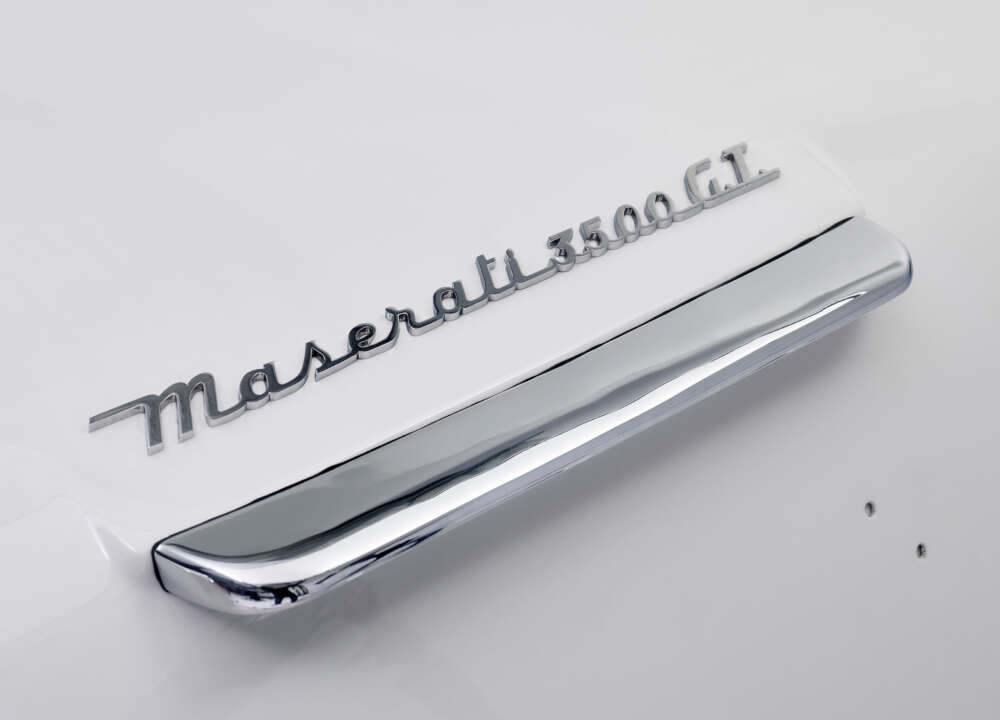 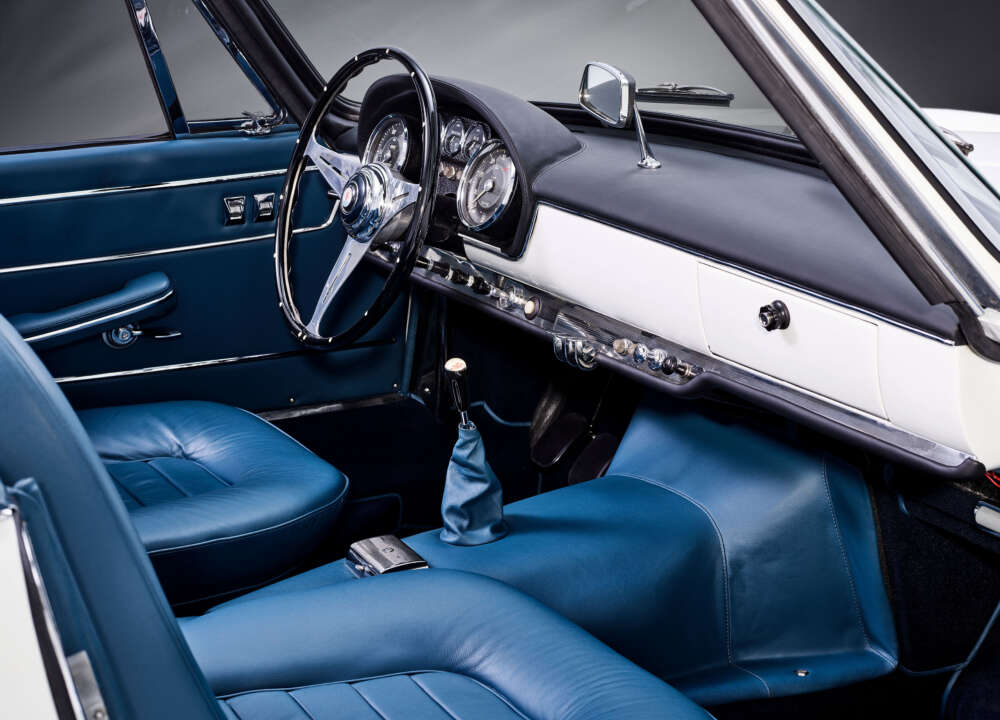 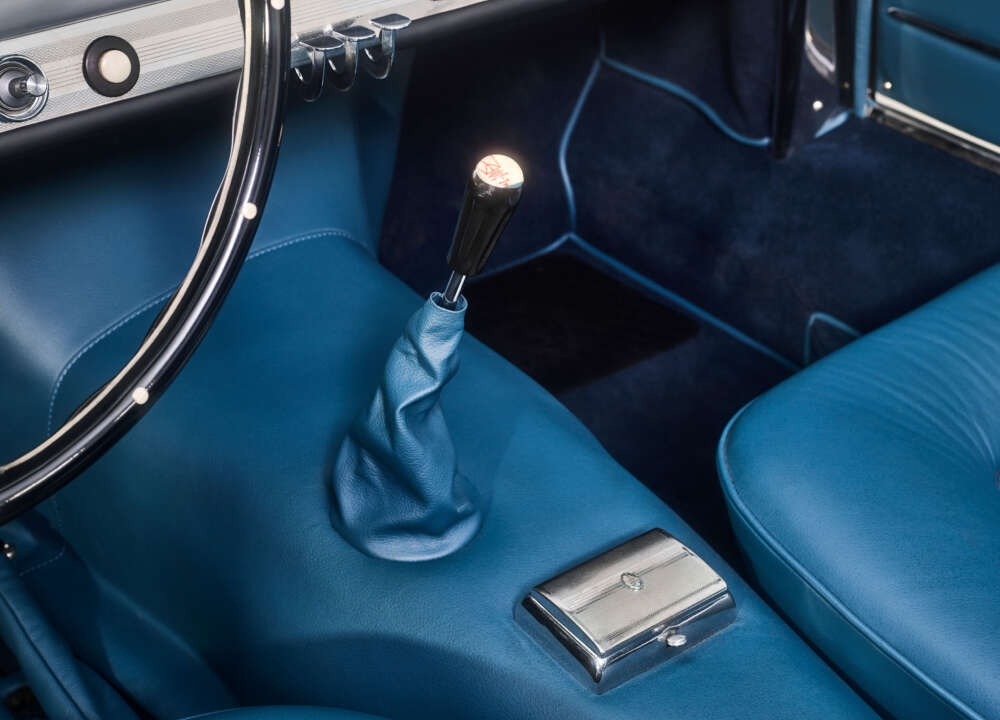 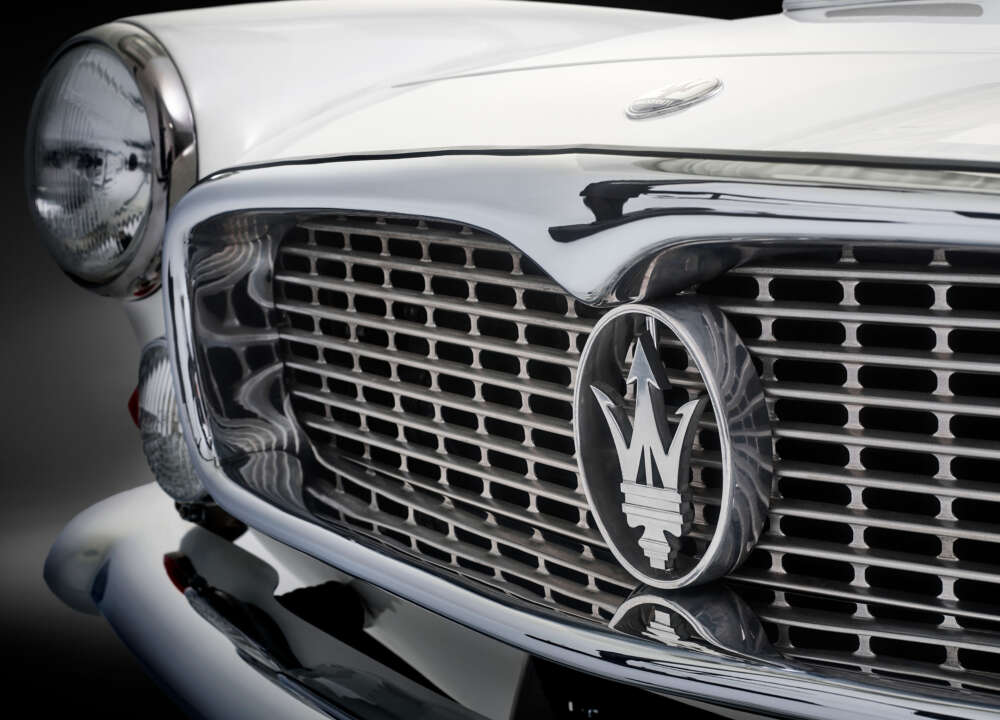 The Aston Martin DB4 Volante came out in late 1961, and it looks like a Touring 3500 Spyder because Touring bodied the Aston! The side of the car is decidedly linear. It seems the Brits got the short end of the stick in this case.
Jaguar's E-type and its roadster (convertible) version appeared in 1961 with the 3.8-litre inline engine producing 268hp.
Ferrari introduced the 250GT Cabriolet Series II in 1959 with its then-standard 3 litre V12.

The E-type roadster can be bought for a price range of Euro 100K to 200K and far beyond for flat floor examples depending on condition. It is even more impractical and cramped with the soft top up than the coupe, and both are not really part of the same market as our Trident due to their mass-produced nature. A Ferrari 250GT Series II cabriolet, as per recent auction prices, will cost you 1.1 to 1.5 M Euros.

Regarding the Aston Martin DB4 you first have to find one of the only 70 made (and how many remaining) and then their prices in recent auction reached 1.1M Euros while an example of the later DB5 sold for over 2M Euros.

In January 2015 an exquisitely restored Vignale Spyder was sold in Arizona for over 1.3 million USD. Today auction results more realistically lie between 650.000 and 850.000 USD. An attractive original color combination combined with a factory hardtop will earn the car a premium. With only 243 cars built one can hardly speak of a ‘common’ Vignale Spyder, but still, some cars are more special than others. The first twenty-something cars built are generally known as pre-series or ‘long bonnet’ cars. They have several distinctive features, the most notable being a long bonnet extending to the base of the windscreen. And even more captivating are the four Vignale Prototypes; they dwell in a league of their own when it comes to valuation.

Should you find a recently completed Vignale Spyder restoration you can expect to pay around the 1 Mio euro point. If you do find one, make sure that the research is done and the history and provenance are with the car. These premium cars do not appear in an auction but rather change hands through private sales.

The valuation makes the Vignale Spyder the comparative bargain in this aristocratic class. It is also clearly defined as the first production Maserati Spyder. In contrast, its rivals of that era were part of a series begun before. Maserati had waited 31 years between the birth of the first racing model in 1926 to the presentation of their first serially built road car in 1957. As the groundbreaking open-top production macchina of Viale Ciro Menotti, it will forever have a special place in the Trident's history books.

One final point: that Zorro actor, Guy Williams? He liked it so much he enthusiastically started a dealership in California. There is no greater endorsement than a client loving a product so much - whatever the product might be - that him or her wanting to represent and market it.

In 2014 Mr Walter Bäumer published an English book "MASERATI 3500 GT Spyder by Vignale".
Limited to just 243 copies, one book for each car produced. It contains details of how to check for originality. It has a detailed chassis-by-chassis number listing with the known history of each car, plus photos.
There's also information about the colours used, sales brochures, plus details and photos of the car 'In the movies'.
At the time of writing this page in 2020, there is no publicly accessible registry available.